What are Frown Lines?

Frown lines (also known as Glabellar lines) are vertical lines that develop between your eyebrows and nose when you frown due to contraction and movement of two facial muscles called the Procerus and Corrugators. These muscles are located near to the upper nose and lower forehead, and are responsible for a variety of facial expressions.

When we are young these lines are superficial and disappear after we stop frowning. However as a result of ageing and other factors frown lines may become deeper and visible even when not frowning, giving a mistaken impression of being angry.

Why do frown lines appear?

Frown lines appear as part of the natural ageing process of the face, however there are certain factors which can delay the onset of these lines and help to reduce the appearance of these lines.

There are a number of reasons why frown lines may appear and become more pronounced over time. We learn facial expressions as children from people around us, including our parents. As adults we pass on these expressions which express emotions such anger or displeasure. We may also frown when yawning or squinting. Hyperactivity in the frown muscles causes frown lines to appear over time and can give a permanent ‘angry’ look to the face.

People who tend to frown a lot out of habit or who are very expressive may tend to develop frown lines earlier. A great way to visualise the development of frown lines is to think of your skin as a piece of fabric. Over time, the fabric changes from being springy and impossible to crease like a piece of elastic, to thinner and more like a piece of light linen.

Skin proteins such as Collagen and Elastin are key to keeping our skin looking and feeling youthful and healthy. As we age, the rate at which these proteins are replenished in our skin reduces and our skin becomes less stretchy and adaptable as it loses its elasticity. This increases the chances of frown lines becoming deeper and remaining visible on the skin.

How to prevent frown lines

Frown lines are caused by a combination of factors, only some of which can be prevented by making changes to your lifestyle. While facial volume loss and skin changes due to expected and predicted natural ageing cannot be completely altered, there are some preventable lifestyle factors which contribute the formation of early lines and wrinkles. Addressing these factors may delay and reduce the severity of frown lines.

Break the habit of frowning

Since frown lines start to appear when your frown muscles contract to cause folds in your skin, one of the easiest ways to prevent them from getting worse is to find ways to keep your upper facial muscles relaxed. Be more aware of the times when you are excessively frowning and try to consciously stop yourself.

If you find that you are squinting whenever you read a book or use a computer, you may find that you need to wear corrective glasses or contact lenses and should book in to see an optician for an eye test.

If you spend a lot of your time outdoors in the sun, you may be squinting to avoid the sun, so wearing sunglasses may be helpful in reducing this.

Antioxidants in your diet

Having a diet rich in fresh fruit, vegetables, vitamins and minerals gives your skin a ready supply of antioxidants. Antioxidants help skin to repair and maintain itself by mopping up harmful atoms, known as free radicals.

Free radicals are generated by environmental and lifestyle factors such as smoking, stress and pollutants and can damage our skin’s DNA by reducing the amount of collagen and elastin produced in our skin.

These environmental stressors built up over many years can leave our skin looking dull, dehydrated and aged. Boosting sources of antioxidants in our diet can mop up these harmful free radicals and help to protect our skin.

Protect yourself from the Sun

Wearing a daily broad spectrum sunscreen which blocks UVA and UVB sun rays will help to prevent premature ageing including early frown lines. Excessive sun exposure can damage the skin’s ability to repair itself, and can lead to early onset fine lines, wrinkles, pigmentation and can increase your risk of developing skin cancer.

Stopping smoking can make a positive difference to overall skin health. Smoking cigarettes has been shown to affect the flow of blood to the skin, disrupting supply of essential nutrients and oxygen. Smoking can also damage the DNA structure of the skin impairing its ability to repair itself.

How to reduce the appearance of Frown Lines

Different treatments are available to reduce or eliminate the appearance of frown lines, skin treatments can visibly improve the quality and surface of the skin in the frown area, and injectable treatments can help address underlying causes by reducing muscle contraction and replacing volume loss.

Skin treatments can improve the appearance and texture of the skin and can be help reduce the appearance of early fine lines. Microdermabrasion uses tiny particles to brush away the top layer of the skin which promotes the healing process leading to new skin growth.

Whilst we don’t perform Chemical peels and laser skin treatments here at Face Clinic London, they work by causing temporary damage to the top layer of the skin which activates the skins natural healing mechanism leading to healthy skin growth and can improve the surface of the skin.

Injectable treatments are an effective way to reduce frown lines. However before embarking on these procedures it is important to also consider the underlying environmental and lifestyle factors above which may be contributing to frown lines.

Botox is a muscle relaxant and can be injected into the Procerus and Corrugator muscles to relax these muscles and reduce the movement of the skin that forms the lines. The treatment affects the muscle underneath the skin rather than the skin itself so once the muscle is relaxed the skin stretches up and out and this can eliminate frown lines. Botox may also prevent the lines from becoming deeper, by reducing the habit of excessive frowning. 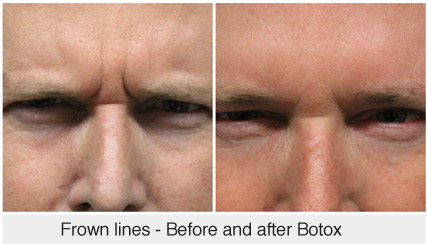 Whilst we don’t treat the frown lines with Dermal Fillers here at Face Clinic London, they can be used.
Dermal Fillers are a soft gel like substance made of hyaluronic acid and are injected into the skin to replace areas of visible volume loss. They work on the principle of adding supporting structure and fullness to the skin similar to natural collagen and elastin. They are used to treat deep frown lines which may have formed a deep groove in between the eyebrows. Dermal fillers are often used after Botox treatment to treat deeper frown lines to fill out the skin folds that are left visible on the skin after the frown muscles have relaxed.

*(Consultations: £100 – redeemable against treatment or purchase.)